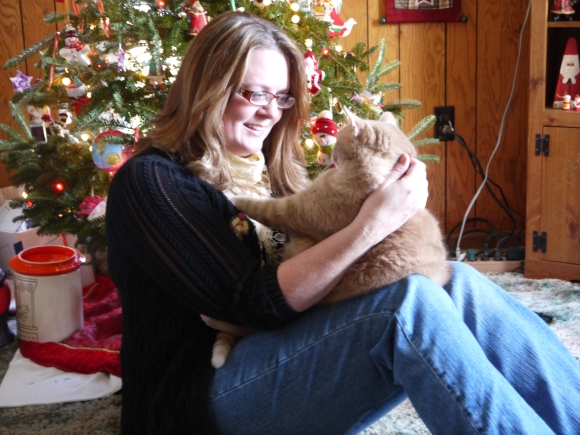 As anyone who knows me is aware, I’m an animal lover. Well, let me rephrase that and say, I love most animals. There are a few animals that rate even lower in my esteem than cooked spinach and grapefruit. But I digress…I’ll come back to that shortly.

But my greatest loves through the years have been with my cats, starting when I was three and my mother took me to pick out my very first kitten. We lived in Starkville, Mississippi at the time (go Bulldogs!) and I remember two things about this experience. The first is that the lady who had the kitten had a house full of cats. Please understand me…I’m not exaggerating in the least. There was literally no room to sit in this house. There were cats on the chairs, sofa, beds, counters, bookcases, coffee table, window seals, floor and the grandmother cat of them all, a long haired white Persian, lay regally atop a chest of drawers. And from all of these, I was to pick one. Somehow I managed to find a scraggly, orange-yellow tabby. I think I named her Fluffy, but I do remember one other thing…two months after we took her home, she ran away with the tom cat from next door, who had been admiring her nightly outside my bedroom window.

Since then, there are been numerous cats that have come and gone from my life. Dogs too, but that is another story. I’ve had long haired, short haired, males and females…even one that was asthmatic and one that was cross-eyed. Only once have a cat of mine had kittens (I’m alum to the Bob Barker school of “spay and neuter your pets”) and she came to us in that condition. I’d have a house full if I could…well, maybe not ‘crazy Mississippi lady’, but a few more than I currently have. Which, by the way, brings me to the star of this rambling…my tom cat, Bucky.

His formal name, R. Buckminster Fuller, is too much of a mouthful for anyone who didn’t attend SIU or is not an architect. (Please Google for more info). So, not only do we call him Bucky, short for the afore mentioned name, which Jim gave him, but it coincides with the fact that he is the beautiful, caramel color of a buck (deer).

As I’ve mentioned in a previous blog, Bucky, like many of my cats (and dogs) is a rescued cat. I rescued him from the side of the highway in front of the Evansville airport. He has been with us since he was four months old and this last June, he turned eleven years old.

For the most part, Bucky is my cat. It’s my lap he prefers, my feet he keeps warm at night and sometimes, when it’s particularly cold out, me that he wraps his sixteen pound (no, that’s not a typo) body around, using his paws around my neck to pull himself as close as possible. This is where our story began two nights ago.

Being a cold night, Bucky jumped onto the bed and proceeded to position himself in the afore mentioned way. Jim had been asleep for a couple of hours at this point and I had just gotten into bed, so I tried quietly to help Bucky get settled in. Just about the time he got comfortable and laid his cheek against mine, I heard a noise. It sounded, ever so briefly, like the beep a cell phone makes when it’s about to die. And just as the thought was crossing my mind that neither Jim nor my cell phone was on the floor in the direction of the noise, Bucky’s head pops up and using my ribs to dig his claws in for traction, he was off the bed and the chase was on! Yes, you guessed it…that ‘beep’ was a mouse.

We don’t get many mice in the house, but the extreme cold tends to drive them in and this was the second mouse (to my  knowledge) that had decided to ride out the inclement weather in our nice, warm home, despite the fact it smelled like cat.

And so, for the next fifteen minutes or so, I listened, lying there in the dark, to the sounds of a squeaking mouse as Bucky would catch then release it. Catch and release sounds so humane, until you put it in the context of a cat and its prey. You see, being a sixteen pound cat (not fat according to the vet…just a big cat), Bucky can’t say that he’s underfed. So a mouse, rather than a source of nutrition, is reduced to a plaything. And what fun is a plaything once you have caught it? No, you must release it and catch it again…many, many times.

And so they ran…under the bed, through the living room, back to the bedroom, into the computer room, under the bed again…on and on. Finally, when I knew they were in the computer room for a few minutes, I got out of bed and made my way quickly to the living room, where I, after pulling the bedroom door to, turned on the lights, got into my recliner, pulled my feet up and waited. You see, I hate mice. Not dislike…hate. I don’t use this term lightly. Not only do I hate mice, I’m terrified of them. Me…who runs to the snake when someone finds one and picks it up to have a closer look…terrified of mice. I’m so scared of them that once, when one got into Bonnie and my apartment and ran under her mom’s vacuum cleaner, I turned it on and sucked the mouse up inside. (Then we sat the vacuum on the porch until her mom came and picked it up the next day…a few days later she noticed the smell)

I’m sure it comes from my childhood, when Baby, another big cat of mine, would most generously catch a mouse and bring it to either my mother or me to share with us. Usually, since mice come out at night, Baby would catch one and jump onto my bed with it. Once, I had my lamp on, reading a book, and Baby brought me a mouse, dropped it in the middle of the bed, where it, being terrified as well, ran away from the cat and straight for me. (I still have nightmares about that…thanks Baby!)

So back to Bucky and the mouse…after a bit, Bucky comes out of the bedroom, stretches and jumps into my lap. No, he didn’t have a mouse in his mouth…I checked before he jumped! Which could only mean one thing…the mouse was still in the bedroom. Now, if you don’t have cats you may think this means the mouse is still alive…not the case, I’m sure. You see, Bucky will not come off of a mouse while it is still alive. Last year, he had one cornered in our closet, after a fun night of chasing (and no sleep for me) and sat and stared at it all day until Jim came home and put the poor thing out of its misery. I am not exaggerating in the least. He didn’t eat, he didn’t sleep, he didn’t move at all, that I could see. He sat from five o’clock that morning to five o’clock that evening, staring at this mouse, huddled in the corner of our closet. As soon as Jim came home from work and removed it, Bucky ate, drank, visited his litter box and slept clear through to the following morning.

Just last week, he sat for seven hours, in our basement, staring under a shelf that he had no hopes of squeezing under. I didn’t see him kill a mouse that day, but Jim had one dead in a trap the next day right by where Bucky was.

And so…I’m assuming…I have a dead mouse somewhere in my bedroom. I figure by tomorrow my nose will tell me where it is. I’ve looked for it but so far have not found it. If only I could train Bucky to find a mouse, kill it and put it in the trash can…hmmm…Bucky, the mouse slayer…it has a nice ring to it!

1 thought on “Bucky, the Mouse Slayer…”