I pray because I can’t help myself. I pray because I’m helpless. I prayer because the need flows out of me all the time, waking and sleeping. It doesn’t change God. It changes me. -C.S. Lewis

A few weeks ago, I went with my friend, Holly, and spent the day at the Archabbey in St. Meinrad. We toured the grounds, visited with several monks that she knew and attended two prayer services with them.

When we first arrived, Holly met with her spiritual director and I spend the first hour in a little chapel in prayer. It was a fairly non-descript room except for the convex window that looked out over the courtyard and a small wooded area. I found my eyes were drawn up the little knoll to the trees time and time again. I assumed it was the sun, shining down in the middle of them, that was demanding my attention.

After Holly finished her meeting, we headed outside so she could show me around. Holly is an Oblate and has spent considerable time at St. Meinrad in study, so I asked her about the wooded area. She said she had never gone up there but was sure it would be alright. So, we left the walkway and climbed the small slope.

At first, I was disappointed. Yes, it was pretty where the sunlight filled the clearing, but I was expecting something more. As we turned to head back down, something caught my eye. It was a trail.

We headed down the short path, admiring the view as we went. It curved around, and right before exiting the woods, we saw her.

There, on secluded pathway, was a statue of the Blessed Virgin Mary. I’m sure it would come to no surprise to the monks that Mary was there; but I’d venture to say that most people walk within feet of it and never know it exists.

It wasn’t ornate by any means; in fact, it was plain to the extreme. Most pictures or statues of Mary are strikingly beautiful and have no need of further imagination. This was an old, weather worn, moss gathering statue that had seen better days and waved them goodbye.

Why then, did I find myself utterly speechless? Look at her. Her eyes are closed. Her arms are crossed. Not at all the image of Mary that I had grown to know and love. But there was something there, in that simple, quiet place, that pulled me in closer to Mary than I had been able to reach on my own.

I read on St. Meinrad’s website the story of this statue. Here’s what it says…

This shrine with a statue of the Blessed Virgin was erected after the Fatima Week celebrations at Saint Meinrad during the week of August 7-15, 1947. In recent years, it has been moved to a quiet area between the monastery and the Guest House. The Fatima Week liturgies and events drew about 250,000 people for Mass in the morning, sermons throughout the day, and Benediction of the Blessed Sacrament in the evening. At that time, the statue of the “Pilgrim Virgin”—a replica of the Fatima Statue—was traveling throughout the country and made a stop at Saint Meinrad during that August week.

I looked up pictures of the Pilgrim Virgin statue. I only found one other that had her eyes closed…but with her hands folded in prayer. So why then did the artist choose to portray her in such a pose?

It brought to mind a game where one person stood on a chair, crossed his arms across his body and closed his eyes. Then the group stood behind him and as he relaxed and fell backwards, lowered him safely to the ground. An exercise in trust. We used it with our youth group as an icebreaker when we were preparing a team for a mission trip.

I couldn’t find information on the artist or why he chose to portray Mary this way. But for me, it was the perfect summation of my ongoing relationship with the Blessed Mother: an exercise in trust indeed.

It shouldn’t have been a surprise that what was calling to me from that hidden trail was Mother Mary. Over that past few months, I have called upon her daily to walk with me…to help me grow closer to her son. I found her through scripture, homilies, books, catechism, songs…but most especially through saying the rosary.

It was hard for me at first, saying the rosary. I found it difficult to concentrate on the prayers. It seemed so tedious. But the more I read about the rosary and the more I prayed the rosary, something amazing began to happen. My mind, for lack of a better explanation, divided in two.

But at the same time, another part of my brain focused on intentions. Praying for the sick, the lonely, the poor, praying for vocations or discernment. It was as though, by praying the rosary, instead of my mind wandering to worldly things, it freed my mind up to hear God’s voice amid the prayers.

Through the rosary, the right and left brain were doing what they do best; complimenting each other by working together, instead of fighting each other for control or attention. By rote memorization, the left side prayed the rosary while the right visualized specific prayer needs. What an amazing God that designed us that way!

Say the words of the ancient prayer and listen for the prayer of God that rises in your heart. -Fr. Edward J. Farrell 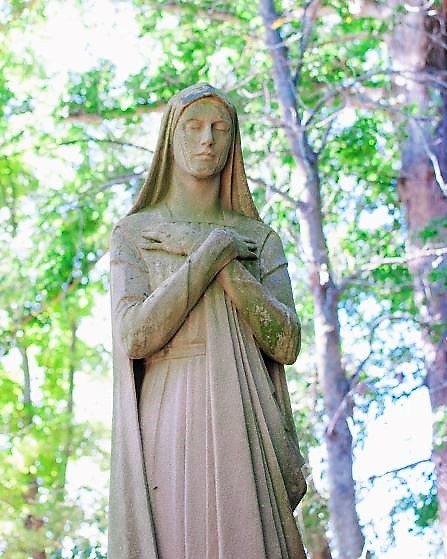